If you believe in coincidence, I do not, skip this page. If you don't then read on. I posted the "Eye of Horus" page before the end of 1999. This page shows a 1991 photo of the Eye from the Russian Spin II satelite. Shortly after the first of year 2000 this photo information is no longer being displayed. Yes you can go to Giza on the Terraserver, but you can no longer view the pyramids at Giza. The following is the message received when these coordinates are now tried.
" Image not found at the specified location. Could not find an image at Longitude = 31.1284722222222 and Latitude = 29.9479166666667 in the TerraServer Database. "
I managed to capture this information before it was deleted from mankind's database. Scroll down and see what re-arrangements have been made to the plateau. 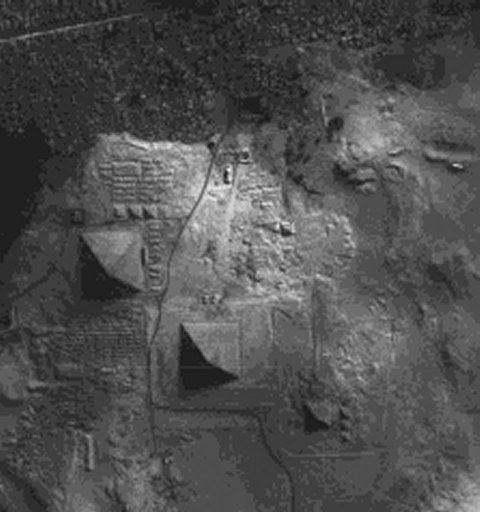 Although this image is of low quality, much may be discerned if one compares it to the older 1950's version. I am amazed at the high quality from the 1950 photo and the amazing low quality from the 1991 photo. The same phenomenon is occuring with the Lunar NASA photos as time goes on. Why is the information available to the public constantly being downgraded, censored, and deleted? 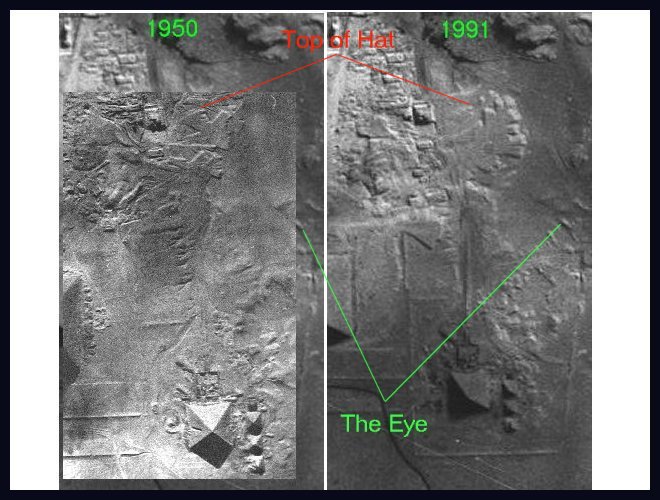 I overlayed the older image over the newer image, and as you can see I have come fairly close in size and positioning. Take some time to review and compare point for point. Massive amounts of sand have been moved over the Ram/Lion and the Bearded Man with Hat. This is further coroborated in the photo-book by Marilyn Bridges, 1996, "Egypt - Antiquities From Above", in which one can see the huge displacement in that area. The Lady and Baby with Cross have a highway through them. The Rays are now a parking lot. It is an absolute disgrace, but the old photos remain!

"I came across your site while looking for info on the Pyramids. I noticed page 23 about Microsoft Terraserver. I wanted to fill you in with some information. The disappearance of the Pyramids imagery was a result of a breakup of the partnership between Aerial Images and Microsoft over the Terraserver project. Aerial Imagery took the mostly international SPIN-2 imagery and has since morphed into Terraserver.com. Microsoft took the USGS imagery of the US and became Microsoft Terraserver and now Terraserver-usa.com. Terraserver.com has recently reloaded the CD that has the Pyramids imagery on it. You can either go to our SPIN-2 page at
http://www.terraserver.com/providers/spin2.asp
and scroll down to Pyramids, Egypt or go straight to where that link takes you, which is
http://www.terraserver.com/imagery/image_ermapper.asp?ulx=316115&uly=3321084.8&lrx=323154.18&lry=3314045.62ℑ=93&provider_id=150.
We also have some imagery of Area 51, which based on the content of your site, you might be interested in. It's in the SPIN-2 list as well.
Mike Browning,
Terraserver.com"