I am about to upset many a paradigm. Yes, the title to this page is correct. Mars is the planet of Osiris. What are the chances one would come upon an image of a man who shares an eye with an image of a lion, when this image is rotated 180 degrees? What are the chances that this same or close to same image could be found on another planet in this solar system? Preposterous, most people would say, and they would be sadly mistaken. Let's take a quick review of the redundant images of Osiris at Giza. 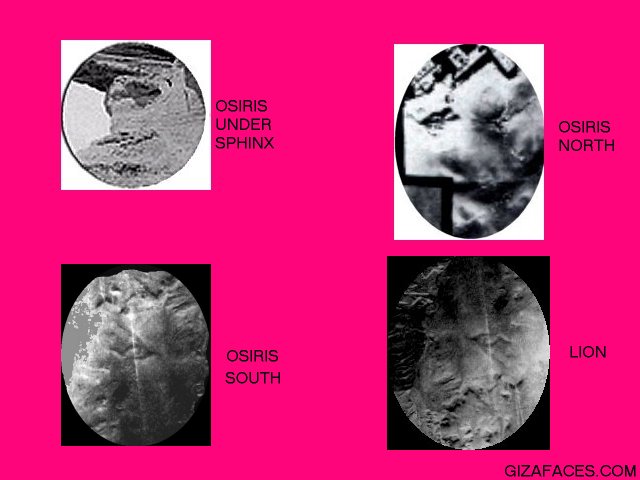 Images of Osiris at Giza

Note the eye set, nose, and facial characteristics of Osiris at Giza. Next one final look at the Osiris/Lion image from Giza, which demonstrates the image seen, when rotated 180 degrees. 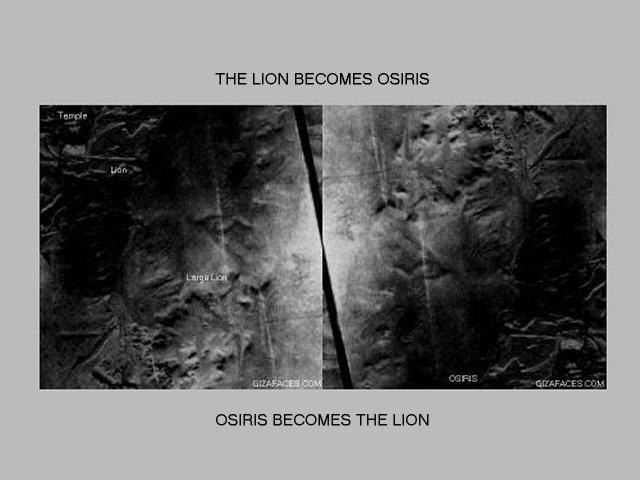 What happens if we now take the Mars image and do the same thing to it? Remember to back away from your monitor to get the correct perspective, and change brightness and contrast levels from one image to the next to see the noted detail. Notice very strongly, the nose with the peak of the nose, above the right nostril. Now look at the Osiris/Lion image and noice the same peak above the right nostril. Now notice the lips, and you will start to see the incredible likeness of the two images. The eyes of the Mars image are sitting on top, of the top grid line in the image. Also, due to this image being laid out flat, I'm sure there are distortions compared to the actual view of the planet Mars.

Mankind Has Already Been To Mars!

You are witness to a step by step look at the latest data on Mars, and the images have not been hoaxed as you can plainly see. So what are your eyes telling you? What is your inner self telling you? Are you listening?