According to Stephen S. Mehler in his latest book, "The Land of Osiris", ISBN 0-932813-58-5, Adventures Unlimited Press, Thoth is reported to have the eyes of an oriental, a caucasion nose and negroid lips. This is just what one of the frontal images looks to be over Egypt. Now I will show you why this image has some lunar connections. If you have visited my lunar faces web site you might remember the images. Scroll down and get reaquainted with them and compare the features. 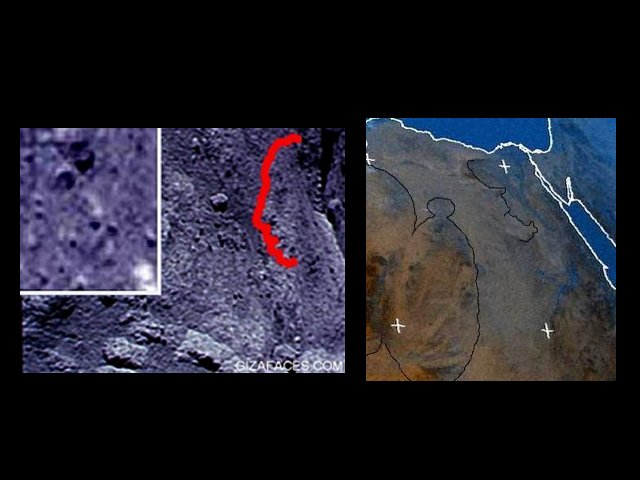 The image on the left is from my "LunarFaces" web site. Farouk El Baz's importance can now be realized to the NASA missions. This is but the beginning to an unrealized reality. One that has been hidden for whatever reason or reasons. Still, we the children will not be denied the truth of our rightful lineage. As a later generation we might have crawled out of the caves, but as an earlier generation we ran into them standing up!

Looking carefully, the Thoth image may be seen in the lower right of the image. What else does one see in this fairly cloudless image. Do you see the image of a horses head from the side with an open mouth and flared nostrils, that forms the nothern edge of Africa? What if we now rotate this same image to the right by 90 degrees? 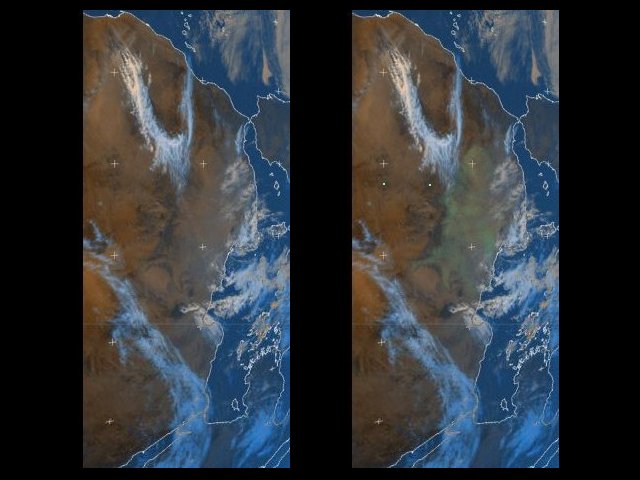 The Kiss Of The Golden Calf!

Now, do your homework. Look for references to the kissing of the calf or golden calf in ancient history and one will find a cornucopia of biblical references and historical references. Of course what could these images have to do with anything historical? Most people would dismiss this as pure folly. Here we see a gentleman (outlined in green mask) with dark and deep eye sockets sporting a beard. He very much resembles the male under the Sphinx and the male image in the "Lovers" on the Giza plateau and on Mars. The calf image has the eyes highlighted for easy reference, Notice the mitered head piece on the calf with horns, a cross, and solar disk at the top. That's right folks, this is just your imagination, so go back to sleep and forget everything you have seen on this page.