So now that we have the most precise view of the entire earthward side of the Moon, we should be able to do some firsthand analysis with this wonderful HST image. Initially we will be working with the 180 rotation of the HST photo.

Now if one just steps back a number of feet from this display, and looks, one's eyes are drawn to the dark areas on a white disc. If we then do a rough connect the dots or connect the blots, we start to see an old scenario of male & female once again, maybe even the family pets. Once again we see male, female, and dog or wolf. 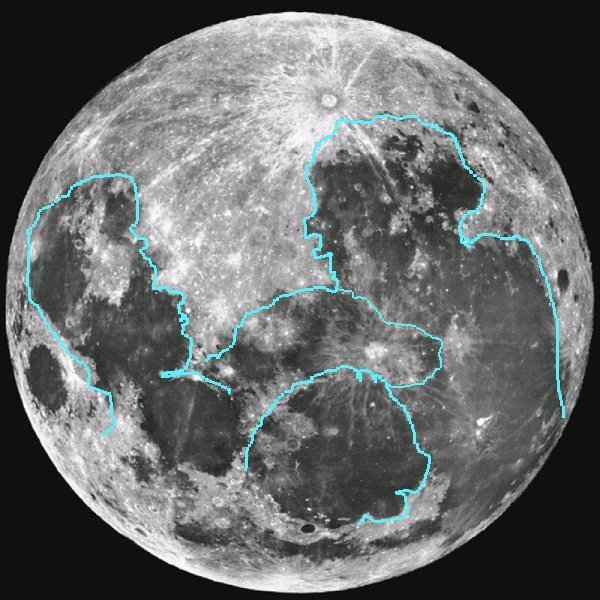 Come on! Get real!

Alright then , let's do just that. First off we are dealing with a highly refractive/reflective surface. Just as in the Nasca lines any slight manipulation of the surface results in a change to the overall refractive/reflective properties of that surface. What a wonderful medium in which one could paint at will to the most infinite degree. Let's say for instance that one had in one's possesion an instrument capable of inducing a vibrational frequency to the surface of a spacial body from orbit? Basically the Moon is a giant "Etch-A-Sketch"! Yes, I know we're in pretty deep here. Back on March 2nd 1972 we launched a small spacecraft. Remember Pioneer 10 & 11? In it was a small engraved pannel. It was our message to the universe, in our own small way.

What if our ancestors just beat us to it? (or) Can we read our own greeting card?

What better signpost than a painted Moon. One must take into account that this is the third world we have seen this male/female signpost. This one is most interesting as we have the best views on the Moon of all three worlds. The intricacy, detail and interweaving of images staggers even my imagination. Think of the Moon as a great painted masterpiece whose creator was capable of painting many images on one canvas. Just as in today's optical special effects we are capable of putting multiple images on a card, and then by overlaying it with special optical plastic, we can see multiple images depending on the viewing angle. Well guess what? The Moon is covered in highly reflective/refractive dust!................Hmmmmmmmmmmmmmmmmmm. The secret to seeing some of these images is a flat plasma screen. As one changes viewing angles the images appear and disappear.